About the photographer
Previous
Next

57 YEARS OF ME
01/05/2006
My Father was a Australian of Irish decent,
My mother was Aboriginal Yankunytjatjara
and Afghan decent
I was born 10/04/55 at Pajura Well near Lake Eyre
at Anna Creek Cattle Station South Australia


HISTORY
Oodnadatta was the first mission station established by the United Aborigines Mission in South
Australia.
Missionary Miss Annie Lock, started the children’s home in 1924. Initially housed in an iron
shed, the children were soon moved to a small cottage purchased by the South Australian Council of the
UAM in 1926.
The following year the twelve children resident in the home were moved to Quorn along
with Matron Ruby Hyde who had been caring for the children since 1925. In 1948 a measles epidemic
in the area aroused the concern of Dr Charles Duguid. He encouraged the establishment of a home
to care for Aboriginal children who might be afflicted with the disease.
That year the South Australian Council of the UAM, which in 1947 had legally separated from the Victorian-based Federal body, reopened the Oodnadatta Children’s Home. Mr. Noel and Mrs. Iris Wiley ran the home initially caring for
twelve children.
During 1949-1950 more children were admitted and the new superintendents, Mr. and
Mrs. Turnbull, cared for fifteen residents with the assistance of two Aboriginal helpers.
Reverend L Reece and his wife took charge from 1951. From the mid 1950s until the closure of the home,
Ruth Bullpit (later Tuffi n) was housemother. She cared for between thirteen and seventeen children, usually with
the help of an assistant.
Until 1956 Aboriginal children were prohibited from attending the Oodnadatta
school. Children living in the home were therefore educated by missionaries at the Mission School. The
home at Oodnadatta closed in 1964


Here I did my schooling and completed my apprenticeship 1976 (carpenter and Joiner)
since then travelled around Australia working.


Currently I live at Munthanma Aboriginal Community 18 Km from Kununurra next to the Ord River, East Kimberleys Western Australia

I am lucky that my present employment with EKCDEP and previously with Centrelink also Volunteering with State Emergency Service have travelled to a lot of rarely visited or restricted areas, week-end camping trips

Film Productions
From this knowledge I was asked to find locations for Bear Grylls's Man V Wild (Kimberleys) movie, then working as a production assistant and receiving a Special thanks credit.
Also a year before production I did a 7 hour chopper ride trying to find a location setting for Australia Movie.

I have logged up about 28,000 Photos a lot are for data i.e. communities - wild life - sunsets - waterfalls - waterholes etc.
My ambition is to get a good canvas printer and do sales as loose canvas prints easier for dispatching and also selling copy-right single or multiple use photos 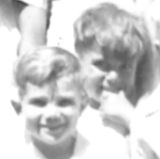 Us two as kids 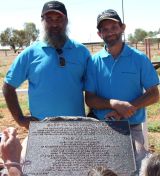 Us two at reunion


3 years old I was fostered out at Grange Adelaide with my 3 siblings.